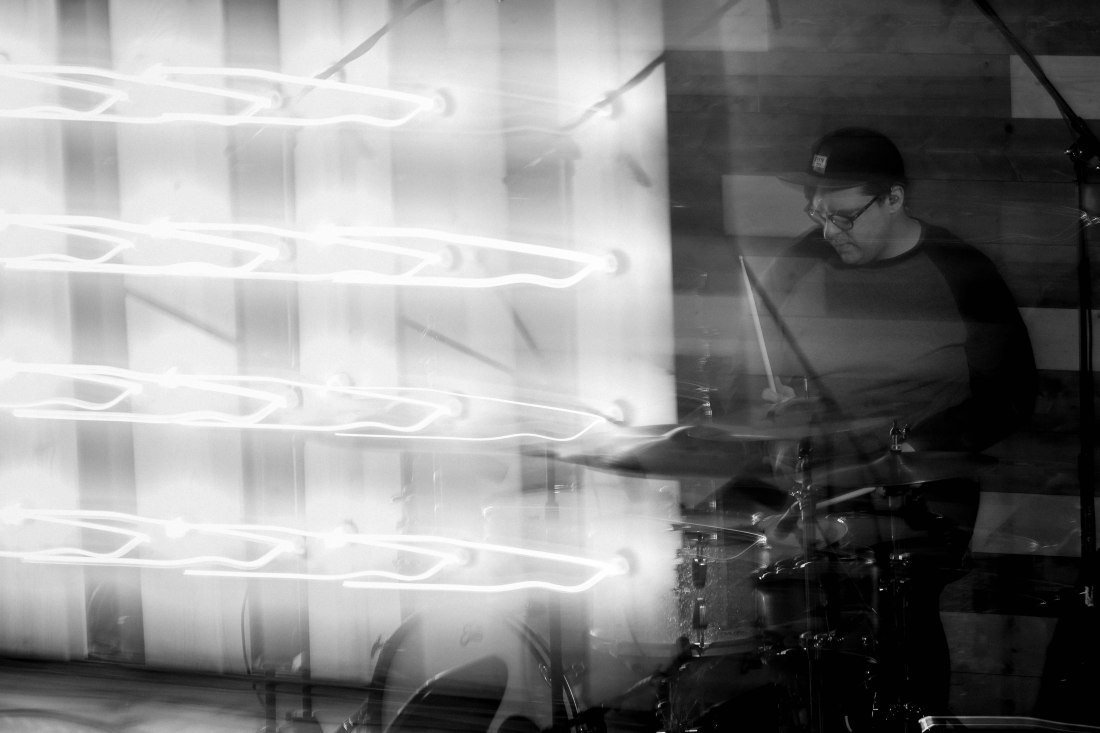 There are a lot of stairs and a lot of history in the Centrum Theater building on Euclid Heights Blvd. It’s been a beloved neighborhood movie house, the subject of a Supreme Court battle regarding obscenity laws, an adult film venue, a sports bar, a comedy club, a gastro pub, a dance club and most recently home to a local church community. At some point in the last few decades, the building underwent some renovations that divided the space into multiple theater spaces and the upper theater just so happens to be a fabulous room for recording drums.

And my good friend Cass happens to be a fine drummer who also has keys to the building.

I’ve talked a big game over the last 4 or 5 years about wanting to make music again and haven’t done much about it. Through the years I actively played in bands, I developed a tendency to approach my writing process with a cohesive, finished album in mind. Now that I’m writing songs almost exclusively on my own, I’ve found myself constantly frustrated by an inability to actually finish my material. What’s the point of writing songs if no one ever hears them? I have dozens of songs that are in various states of completion that I just never finished because they don’t seem to fit together as a part of a larger album. I admit that this is stupid.

So I went back to basics. I decided that by the end of March 2017 I would write, record, and mix one song to completion. I adopted the mindset that it would never be perfect, but it needs to be finished. Enter Cass Jewel.

I’ve known Cass and have seen him weekly for the last few years. He is the Director of Communications at Heights Church; a job that puts him in charge of overseeing most multi-media related needs. Naturally, since we have very complimentary skillsets, we have collaborated and worked together on many things, but it’s been an unfortunately rare occasion for he and I to enjoy time together that isn’t official church “business.” This project was a great opportunity to spend some time with my friend creating art purely for the joy of doing it.

The most time consuming part of the evening proved to be the stair climbing. The theater contains plenty of sound equipment that we were able to utilize, but I still had to bring a few items of my own to be ready to record a proper drum session. The theater is on the top floor of the building so all my stuff had to be brought up. The stage is at the front of the upper theater. The control room we set up shop in is in the upper projection room at the top of the theater but some of the equipment we needed for the recording was a few flights of stairs down in the lower projection room for the lower theater. Unfortunately, any health benefit of climbing all those stairs was likely squandered by all the Girl Scout Cookies we consumed.

I gave Cass only a few basic directions for the song (It starts like this, then does this for awhile, then I want to build it to this… ) and basically asked him to do what sounded cool to him. “I want you to be a drummer,” I told him. “Have fun with it.”

He had only heard the song demo a few times and that was all the direction he needed to get to work. 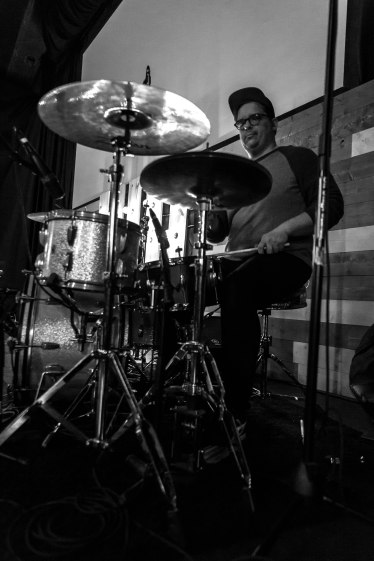 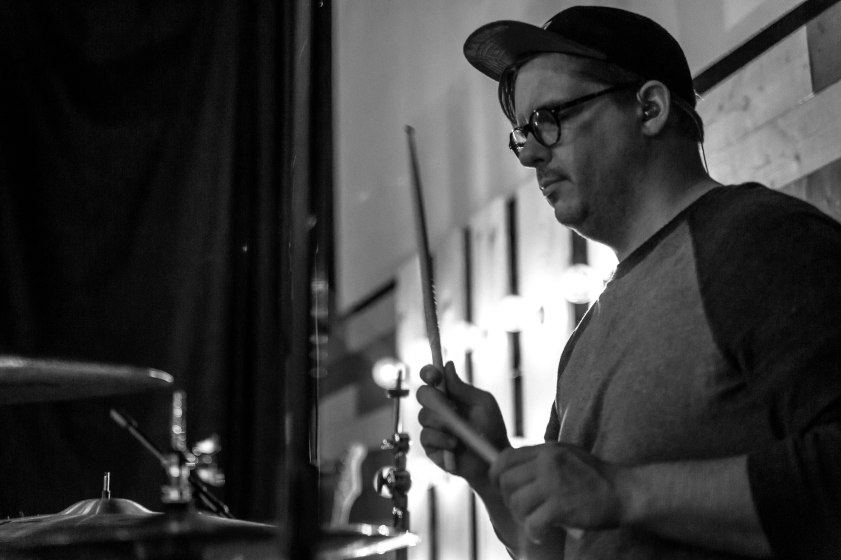 The first pass was an experimental take where he threw several ideas against the wall to see what stuck. He played through to the end. We discussed some things we both liked and things that didn’t work as well and he did another take. We reviewed it again, agreed on some minor adjustments and we rolled again. We followed this formula for only 7 takes, and it was done. Just like that, the drums were recorded.

I’m not sure I properly relayed to him how impressed I was with his musicianship. I’ve been writing songs for years, but I’m very untrained. Watching a musician come up with something excellent and definitive in that amount of time is something I can’t wrap my head around. It takes me many hours of playing, stopping, thinking, playing, stopping, getting distracted, etc. to come to a place where I am satisfied with what I’ve created. Cass nailed it in 7 takes.

After that, it was time to move equipment all over the theater again so that it was ready for Sunday morning and that meant more stairs. We talked as we worked, as we had when we were setting up. I learned a little more about his family and his plans for the future. We made some jokes and talked shop. I snapped some photos and I’m glad I did. It may never be as important as a Supreme Court case, but I thought it was history worth remembering. Not bad for a Tuesday.

View all posts by terrygeer

I am involved with